Snapshot: The Hulk of the Normandie

After catching fire and ultimately capsizing on February 10, 1942 the French Line's famous Normandie (which had been renamed USS Lafayette during conversion to a troop transport) lay on her side in disgrace. It was not until August the following year that she was righted; it had been hoped to restore her to sailing condition. The damage was too extensive, however, and the burned out hulk was later sold in 1946 to Lipsett, Inc. for scrap.
Less than a decade old and the grand liner's days were numbered. The Normandie/Lafayette would be completely broken up by the end of 1948.
Posted by The Ranger at 2:21 PM No comments: 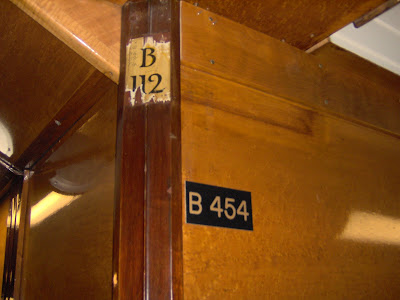 This photo was taken several months ago while aboard the retired RMS Queen Mary. It shows the type of plaque used for the hotel today, but also an example of the ship's original cabin numbers. I can only assume was used from 1936 to 1947. I came across quite by accident that day.
I've never seen anything like it before on the Mary - the number plaques I'm familiar with were painted on pieces of wood in either red or green paint (such as the one seen here).
Posted by The Ranger at 3:03 AM No comments:

Snapshot: George Harrison on the QE2 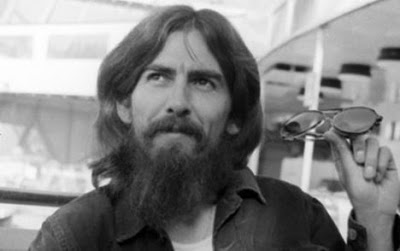 George Harrison poses for a quick picture while sailing aboard QE2 in the early 1970s.
Despite the fact his music was often overlooked, George wrote some of the most beautiful songs in rock history (this includes his time with the Beatles as well as his subsequent solo career). He was the rare kind of musician who hated the limelight and having people watch him onstage; he would rather have been home gardening instead.
It was 10 years ago today that George Harrison died of cancer. But although his body may have passed away, his soul lives on through the music.
Posted by The Ranger at 8:58 AM 1 comment:

Continuing on my recent string of Nomadic posts, this documentary clip shows the ship as she was in Paris while serving as a restaurant.

Posted by The Ranger at 4:44 PM No comments: 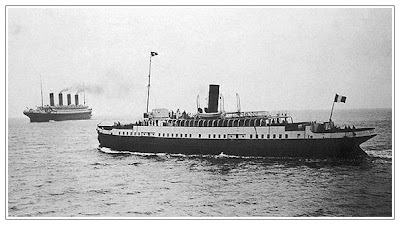 The tender Nomadic services the RMS Olympic, the last remaining ship of the White Star Line's grand trio that included Titanic and Britannic.
Of all these great ships, however, only the small 1,270 GRT Nomadic remains. She is currently undergoing renovations in Belfast, Northern Ireland and slated to be opened as a museum ship in the near future.
Posted by The Ranger at 2:16 AM No comments: 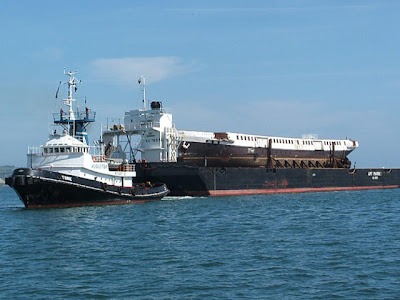 Nomadic - the last remaining White Star Line ship afloat - returned home to Belfast, Northern Ireland in July 2006 after serving as a restaurant in Paris for a number of years. Launched in 1911 and ported in Cherbourg, France, she was a tender for the great Olympic and ill-fated Titanic.
After the merger with Cunard in 1934, however, Nomadic went on to service the Queen Mary and Queen Elizabeth until their respective retirements.
Posted by The Ranger at 1:53 AM No comments: 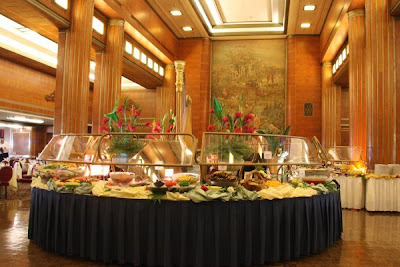 A very happy Thanksgiving to everyone out there! May it be a grand day filled with feasting, family and fun!
Posted by The Ranger at 7:05 AM No comments: 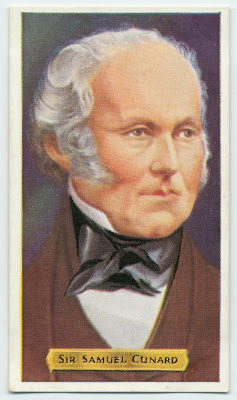 Your legacy lives on, Sir Samuel!

Posted by The Ranger at 6:56 AM No comments:

It was a year ago today that I wrote about Howard Zinn's experiences aboard the Queen Mary in World War II, which also happened to be the same day I created this blog.
It's been a great year and I'm pleased that so many people have enjoyed all this. It's my hope to continue strong for 2012, though I can't be sure for the rest of this year (I'm in my last month of undergraduate work and have a ton of work I need to do - hence why there have been only four posts this month).
Thanks everyone for your continued support and viewing!
Posted by The Ranger at 8:46 AM No comments:

This film is about 45 minutes or so long, but offers a splendid look at the Queen Mary in 1956. Areas visited include many of the ship's magnificent First Class areas, but also the bridge, engine and boiler rooms. Captain Donald Sorrell is also interviewed and discusses how he famously docked the Mary without the use of tugs during a strike in New York.
All in all, it is an amazing little film!

Today, let us remember all those who have served in their nation's military.

It was also 93 years ago today that World War I came to a close. The video I've included here is of "In Flanders Fields," a piece written by Lieutenant Colonel John McCrae in 1915 while serving in the trenches of World War I.

"We're holding our own."

The ore freighter Edmund Fitzgerald went to the bottom of Lake Superior on November 10, 1975 after encountering a fierce winter storm. When she sank, the ship took all 29 of her crew with her - leading to a major search and rescue operation by the United States Coast Guard. The wreck was found four days later by U.S. Navy aircraft; it was less than 20 miles away from the safety of Whitefish Bay. 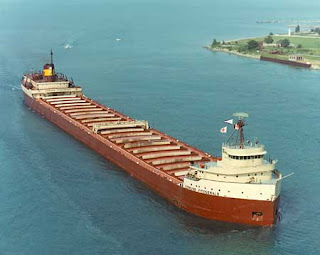 Canadian folk singer Gordon Lightfoot released "The Wreck of the Edmund Fitzgerald" a year after the sinking. Although some of the details are incorrect (he has since fixed them in live performances), it nevertheless immortalizes this grand old freighter and has made her one of the most famous shipwrecks in North American history. Not to mention it's a personal favorite of mine.