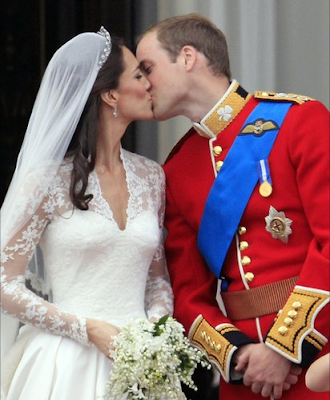 Prince William and Miss Kate Middleton were married today on April 29, 2011 in a magnificent service at Westminster Abbey. The royal couple have been styled the Duke and Duchess of Cambridge by Her Majesty The Queen.


May they spend many happy years together!

Posted by The Ranger at 7:19 AM No comments: 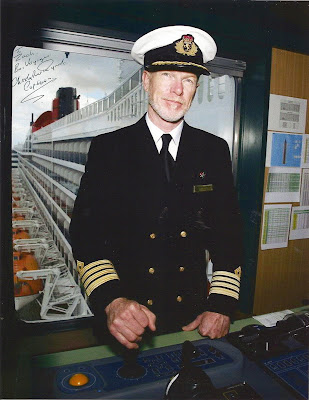 He began his career in 1970 at the age of 17 and earned his Master's certificate nine years later. Commodore Rynd served several years with the P&O Line and Princess Cruises before joining Cunard. He joins an elite group of mariners that include such illustrious names as Sir Arthur Rostron (who steamed the Carpathia to the Titanic's survivors on April 15, 1912), Sir James Bisset, Geoffrey Marr and Ronald W. Warwick.

Although I've never sailed under him, I have had the pleasure of meeting Commodore Rynd twice: both in February 2011.

The first was aboard the famous Queen Mary in Long Beach, California. I met him and his wife, Julie, in the ship's Main Hall. I presented them with a few gifts and then offered to show them around the After Engine Room for a bit. They agreed and both seemed to enjoy themselves tremendously. Then-Captain Rynd was even so kind as to autograph a photo for me (see above)!

The second time was aboard the Queen Victoria about a week later. One of my co-workers was able to get both of us aboard through a contact with Cunard. I didn't expect to run into Captain Rynd at all, actually. We were shown all around the ship - and oh what a beauty she is! We were even invited up to the bridge at the end! The officer met us on Deck 3, I think it was, and took us up. As we walked through the corridor of offices, I noticed the Deputy Captain in his office and thought it'd be funny if we happened to run into Captain Rynd. As it turns out, his door was opened and he asked our guide what was going on. He said he was giving some guests a tour.

"Oh really? Who've you got?" I peeked my head around the door. "Oh Zach! It's so good to see you!" I could tell he was pleasantly surprised. We chatted for a few moments, then told me to stop back by his office after our tour. We did so, and he presented my friend and I with "White Star Service" pins, but also gave me a watch that was only available to Queen Victoria crew members. I thanked him tremendously for this great gift.

I sincerely wish the best of luck to Commodore Rynd in his new role! Cunard has made an excellent choice. 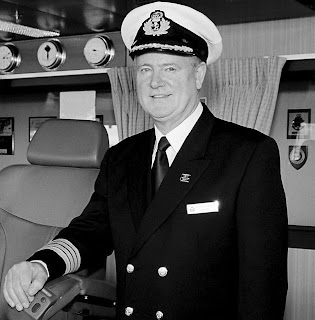 Commodore Bernard Warner retired from the Cunard Line on April 19, 2011 after more than 40 years at sea.

Samuel Warwick (son of Commodore Ronald W. Warwick and grandson of Commodore William E. Warwick) has put together a rather nice summary of Commodore Warner's career at sea; I highly suggest taking a look. He has certainly lived an interesting life!

He will be missed by all those who sailed under him. I've never had the pleasure of meeting him, but from I read he is one of the nicest men to have ever donned the Cunard uniform.

Good luck to you, Commodore Warner!

Posted by The Ranger at 6:28 PM No comments: Happy Easter from the Captain's Table!
Posted by The Ranger at 8:20 PM No comments: 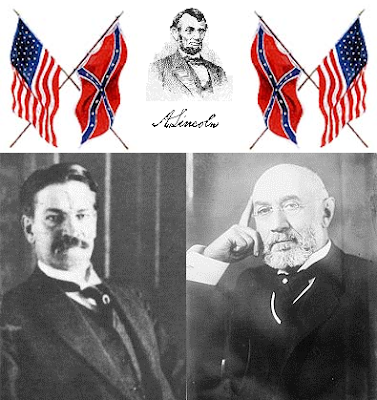 This past April 12 marked the 150th Anniversary of the start of the terrible American Civil War. It was in 1861 when Fort Sumter was bombarded by Confederate forces in South Carolina, and President Abraham Lincoln was shot on April 14, 1865: 146 years ago today. And if that were not enough, the RMS Titanic struck an iceberg 99 years ago tonight.
Definitely a month of tragedy. But they are connected too in some small way. How?
Colonel Archibald Gracie survived the sinking of the Titanic and published an account of the disaster later on. He notes how he became quite close with Mr. Isidor Straus during the crossing. He "related much of special interest concerning incidents in his remarkable career, beginning with his early manhood in Georgia when, with the Confederate Government Commissioners, as an agent for purchase of supplies, he ran the blockade of Europe." Colonel Gracie - being an amateur historian - then mentions how he loaned his most recent book, called The Battle of Chickamauga, to Mr. Straus. He was extremely interested with this work and told the colonel so quite excitedly, expressing "an intense interest" in it.
Gracie writes this under the section of his account that took place on the morning of April 14, 1912. By 2:20 on the cold morning of April 15, he would be clinging to life on the upturned Collapsible Lifeboat "B." Mr. and Mrs. Straus would go down together - refusing to be separated after 41 years of marriage.

References: Archibald Gracie, The Truth About the "Titanic," in The Story of the Titanic as Told By Its Survivors, ed. Jack Winocour (New York: Dover Publications, Inc., 1960), 121.
Posted by The Ranger at 8:41 PM No comments:

The Sinking of the SS Titan

The SS Titan was one of the grandest ocean liners ever to set sail on the Atlantic. She was 70,000 GRT, 800 feet in length and had the capacity to carry around 3,000 people. Her three propellers could easily make between 24 and 25 knots while being manned by the pick of the Royal Navy Reserve and Merchant Marine. She was considered by many to be one of the safest ship afloat - some even dared to call her "unsinkable." Despite this, however, Titan carried just 24 lifeboats: enough for about half of all the people aboard. But it was highly unlikely that they would be needed in any case. Then fate intervened.

The Titan struck an iceberg on her maiden voyage. The impact was on the starboard side of the ship and took place on a cold April night. Titan sank with a tremendous loss of life.

The SS Titan, however, was the pure invention of an American writer named Morgan Robertson. It was featured in his 1898 novella called Futility, or the Wreck of the Titan. Interestingly enough, the White Star Line's ill-fated Titanic shared many of the same characteristics as the fictional ships - including the nearly identical name and reputation for being "unsinkable".

Posted by The Ranger at 3:56 PM No comments:

Who would ever have thought that the QE2 would sound her famous whistle again? 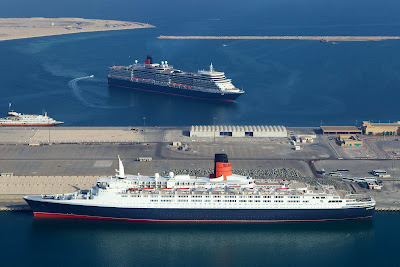 That is precisely what she did, though, when the brand new Queen Elizabeth visited her in Dubai recently. This was the first meeting between these two ships. This has indeed been a voyage of firsts for the new Lizzie. Peter Shanks, the President and Managing Director of the Cunard Line, noted how on this World Voyage her passengers have "have seen Two Queens in Southampton, Three Queens in New York, Two Queens in Fort Lauderdale, Two Queens in Sydney – and today a very special rendezvous with QE2 in Dubai." Certainly a cruise worth remembering!


And what of the old QE2, who has been sitting in Dubai for the past two years? Mr. Shanks noted:

[That] she looked very good from the outside. She has a small crew onboard to keep things going and I understand that she has been well kept on the inside – despite the very high temperatures in Dubai. Given the tough economic situation in Dubai – they have not yet commenced their extensive plans for the ship and we all wait to hear what lies ahead for QE2. But for today she looked magnificent.

Firstly, I hope my little prank from yesterday caused a smile or two (as well some confused looks). Secondly, though, I thought I'd talk about a direct-to-DVD film called "Titanic II." No, this is not a prank. It's not April Fools' Day + 1. The film centers around a brand new Titanic (that has been outfitted with modern safety features) and her maiden voyage across the Atlantic. A tsunami subsequently pushes an iceberg into the ship's path, causing history to repeat itself. Many people believed that this was indeed a sequel to James Cameron's "Titanic," but quickly found out otherwise. "Titanic II" has since been labled a mockbuster.
Posted by The Ranger at 1:28 PM No comments: 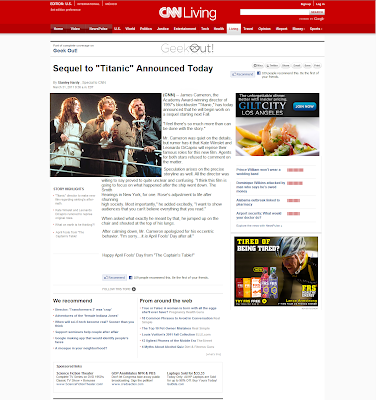