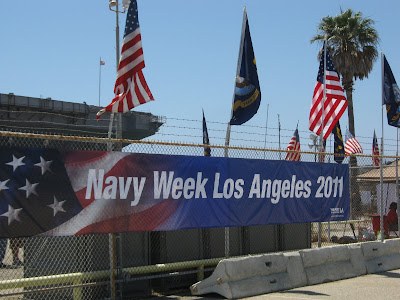 While not ocean liners, warships are still beautiful and evoke strong feelings of power, patriotism and pride. They are hard-working ships as well: from the mighty aircraft carrier to the humble minesweeper. They have a very serious job to do, and they remain vigilant at all times. I think it will surprise few that they are another keen interest of mine (it doesn't help either that my grandpa and uncle both served in the US Navy). So when I found out that several ships were coming to the Port of Los Angeles this week, I had to write about it!

This is the first time that Los Angeles has had a Navy Week. The program was started five years ago in order to inform the American public about the services rendered by sailors and aviators by inviting them to tour these ships. This is completely free to the public and has been incredibly popular.

Four ships sailed into the Port of Los Angeles (San Pedro) for the event: the aircraft carrier Abraham Lincoln, the cruiser Princeton, the destroyer Chafee and the minesweeper Champion. 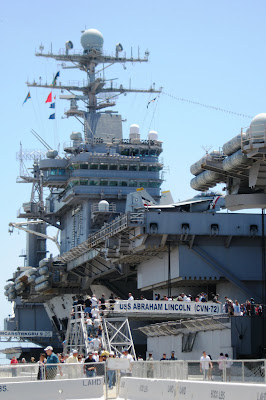 On Thursday, July 28 I visited the Abraham Lincoln. For size and security issues, she was docked at nearby Cabrillo Beach instead of at the cruise terminal. I waited in line for two hours as a small fleet of buses took people to and from the carrier. But we finally made it over and aboard.

"Wow!" That's all I could think, and it's still all I can say when people ask me about it.

The other ships were closed for tours by the time I returned. I'm planning to go back on either Saturday or Sunday in the hopes of getting aboard the Princeton and the Champion (Chafee left earlier today).

For more information about Navy Week, go here: U.S. Navy Weeks
Posted by The Ranger at 10:00 PM No comments: 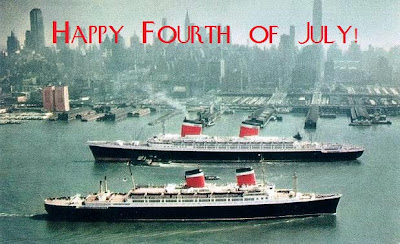 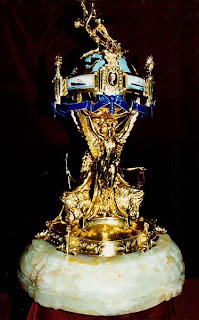 The Hales Trophy was commissioned by Harold K. Hales in 1935 to embellish the Blue Riband - the honorary title for setting the transatlantic speed record - with an actual prize. Italy's Rex took it first, followed by France's Normandie. The Queen Mary subsequently won the award, but her owners refused to accept it. It was not until 1952 that the trophy would be awarded again; this time to the SS United States. 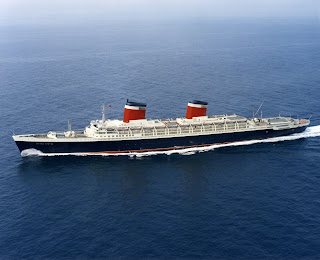 The Big U would remain unchallenged for the next 38 years - until 1990 when the catamaran Hoverspeed Great Britain claimed the transatlantic record with a time of 3 days and 7 hours. When her owners tried to obtain the old Hales Trophy, however, a controversy erupted.
The award had been set up specifically for passenger liners; the United States Lines American Merchant Marine Museum - which displayed the prize - refused to relinquish the trophy. The Hoverspeed Great Britain had not carried any passengers on this crossing, which was considered a key requirement for the award. It had been an eligible contender, however, as the award's British trustees approved the attempt. 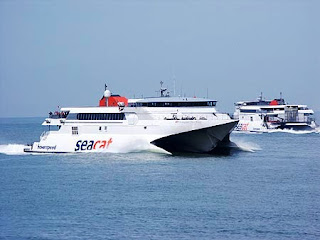 The Americans were ready to take their claim to court, but ultimately decided against it. Carnival Cruise Lines would later give the American Merchant Marine Museum a replica of the Hales Trophy.
References: Barbara Lloyd, "YACHTING; Suit May Be Filed Over Hales Trophy," The New York Times, July 15, 1990, Sports section.
Posted by The Ranger at 9:17 AM No comments: