"You needn't worry...He will keep out of your way:" The Ramming of HMS Curacoa

During the dark days of World War II, HMS Curacoa was accidentally rammed and sunk by HMT Queen Mary off the coast of Northern Ireland on October 2, 1942. It was a military blunder that cost hundreds of lives and continues to haunt the Queen Mary today.

The HMS Curacoa, under the command of Captain John W. Boutwood, was charged with protecting the liner as she made her way to Gourock, Scotland. He took up a position about five miles ahead of Queen Mary at around 10:00 am as she made her way to disembark the over 10,000 soldiers aboard. The Cunard White Star liner was commanded by Captain C. Gordon Illingworth, who had his ship steer a standard zigzag course - known as Zigzag No. 8. Captain Boutwood, however, was not sure at which point in the pattern Queen Mary was currently at, which was the first in a series of errors.

The two ships started drifting dangerously close to each other. The Queen Mary's Junior First Officer Stanley Wright ordered "Hard-a-starboard!" Captain Illingworth emerged from the chartroom to see what the matter was. Examining the situation, he told Wright not to worry and ordered a correction.

After taking the appropriate action, Captain Illingworth told his subordinate that he "needn't worry about her. These fellows know all about escorting. He will keep out of your way." 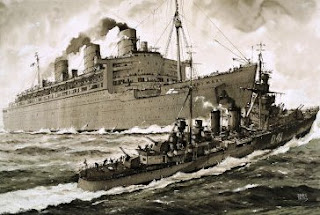 At around the same time aboard Curacoa, some of Captain Boutwood's officers were concerned that Queen Mary was not keeping a steady course - and she eventually began overtaking the cruiser. Senior First Officer Noel Robinson took the watch from Wright and saw how close the Curacoa was approaching from starboard. He at first tried to ease off to port, but finally ordered Queen Mary "Hard-a-port!"

But it was too late. 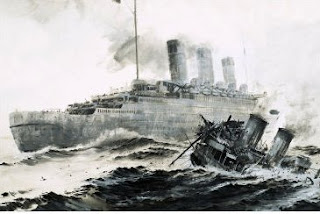 The two ships collided with each other at 2:12 pm. The massive Queen Mary split Curacoa in two, leaving the cruiser's halves engulfed in flames. She sank six minutes later with a loss of 338 men - from a total crew of 439. The Queen Mary was under strict orders not to stop for anything and continued on to Scotland, where she was outfitted with a concrete plug and sailed to Boston for more permanent repairs.

Each ship was subsequently found to be responsible for the disaster. A recent dive to the Curacoa's wreck found that her rudder was still set ahead and made no attempt to correct course. It is likely, however, that everything happened so quickly that the cruiser's crew had no time to respond.

Either way, it was indeed a tragic day for both the Queen Mary and the British Royal Navy.

Happy Thanksgiving to all! May it be a grand day! 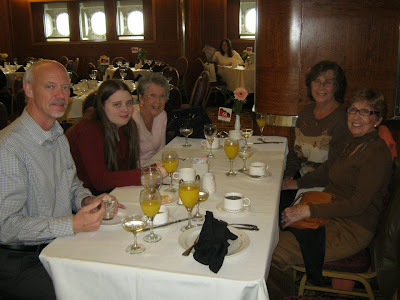 My family aboard the Queen Mary for Thanksgiving Brunch last year. I'm taking the photo.

Posted by The Ranger at 8:29 AM No comments:

Things have been quite busy in the last few months, and I apologize for neglecting this blog for as long as I have. I shall endeavor to keep up with it in the future. So in the meantime, here are some lovely photos of old ocean liners. Enjoy! 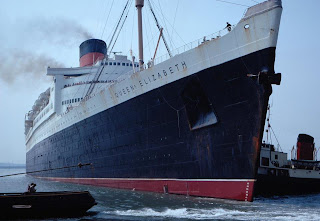 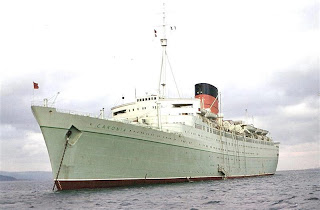 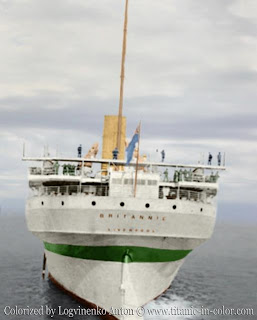 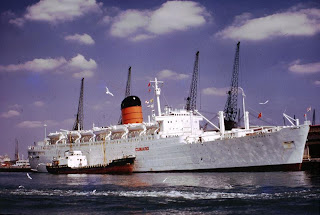 "Nearer My God to Thee"

Posted by The Ranger at 2:20 AM No comments:

Email ThisBlogThis!Share to TwitterShare to FacebookShare to Pinterest
Labels: "Nearer My God to Thee", 100 years ago, 1912, 2012, April 15, centennial, Titanic 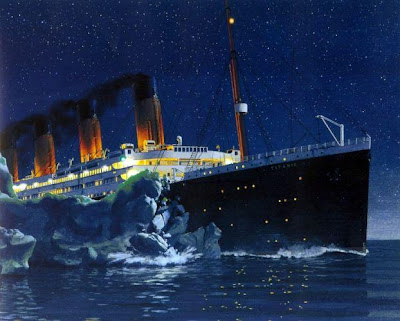 Titanic's lookout, Frederick Fleet, spotted an iceberg directly ahead of his ship at 11:40 pm on April 14, 1912. Despite the crew's best efforts, a collision could not be avoided and fatal damage was inflicted on the liner. The iceberg opened Titanic's first five watertight compartments and was her death sentence.
Posted by The Ranger at 11:40 PM No comments: 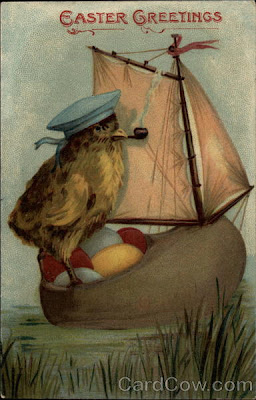