"I name you the Rotterdam and wish you a safe journey."

SS Rotterdam was launched on September 13, 1958, after having been christened by HM Queen Juliana of the Netherlands. Thousands came to the event. They knew that this would be a great moment in Dutch maritime history - how could they possibly miss it?

"I name you the Rotterdam," the Queen said, "and wish you a safe journey."

With that, the ship entered the water for the first time. Her Majesty could not have known then that now - 53 years later - the ship would still be with us. The Rotterdam is one of those rare liners that escaped destruction at the hands of the breakers. She now operates as a floating hotel in Rotterdam, which is indeed a most appropriate place for her retirement indeed.
Posted by The Ranger at 2:33 PM No comments: 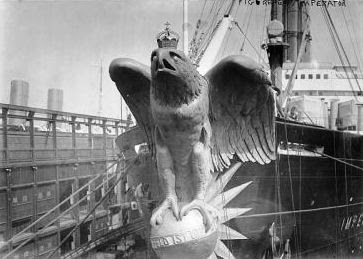 The Imperator, launched in May 1912, was Germany's pride and joy. This is clearly reflected in the beautifully sculpted bronze figurehead that adorned her bow. The eagle - an old symbol for Germany - wears the imperial crown and has its talons wrapped around the globe, which reads Mein Felt ist die Welt ("My field is the world"), the motto for the Hamburg America Line.

It was not to last long, however. The figurehead was severely damaged during a fierce Atlantic storm in 1914 - the eagle's wings were torn off and the statue was eventually removed altogether. 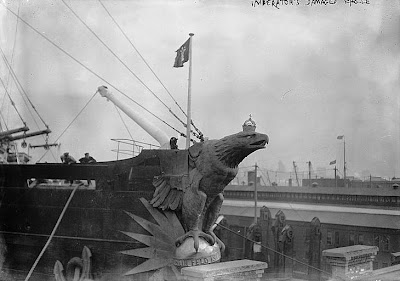 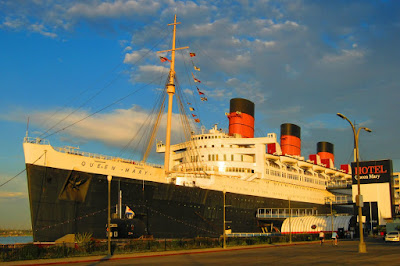 After 31 years of service, the famous Cunarder Queen Mary was sold to Long Beach, California. After arriving on December 9, 1967, she was reconverted for use as a museum, hotel and tourist attraction. Queen Mary has been in retirement for nearly 44 years now - longer than she ever sailed. She remains as one of the few links we have to a bygone age of travel.
God save the Queen!
Posted by The Ranger at 11:06 PM No comments: 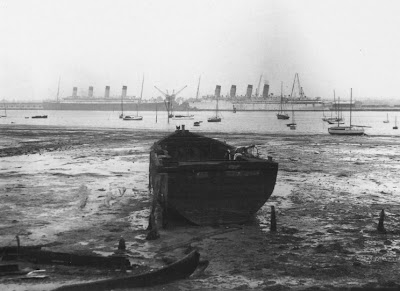 This photo was taken in 1935 and shows two former rivals at anchor - the White Star Line's Olympic and Cunard's Mauretania - shortly before going to the breakers that same year. Following the creation of the Cunard White Star Line in 1934, both aged ships were retired to make way for such new liners as the unfinished Queen Mary and planned Queen Elizabeth.

Mauretania went to Rosyth and Olypmic to Jarrow. The demolition of these two ships provided plenty of employment opportunities for these poverty-stricken areas.

It was 73 years ago today that the RMS Queen Elizabeth was launched by HM Queen Elizabeth (consort to HM King George VI), in the company their Royal Highnesses Princess Elizabeth and Princess Margaret. This ship was the highly anticipated running mate to the popular Queen Mary (launched four years prior). 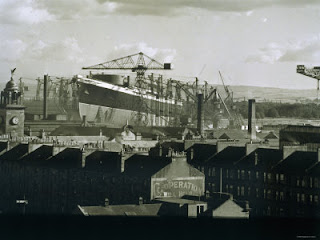 The Queen Elizabeth, however, was a different ship than her older sister - and larger too. Building the Mary had allowed the shipbuilders to test new ideas and refine their methods. The effect? Elizabeth was the most technologically advanced liner in the world at that time. 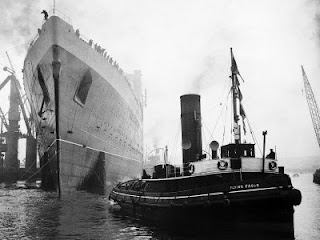 The start of Lizzie's passenger service was interrupted, however, by World War II. She was secretly sailed out of Britain to New York - arriving in March 1940. She and Mary would transport over 1 million soldiers to all corners of the globe before resuming their intended careers as passenger liners.

Together, the two Cunard Queens ruled the transatlantic trade and remain two of the most famously popular ships in the world.

It was 77 years ago today that RMS Queen Mary was launched by HM Queen Mary (consort of HM King George V) at the John Brown Shipyard in Clydebank, Scotland. It was a true triumph for the British in the darkening days of the 1930s. She really was a symbol of Britain's maritime power. 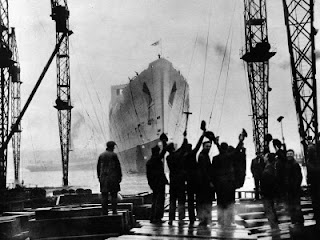 The Queen Mary began life as Job #534 in December 1930, although construction halted a year later due to the Great Depression hitting Europe. Securing a loan from the British government, work resumed in 1934 which culminated in one of the most anticipated launches in maritime history. 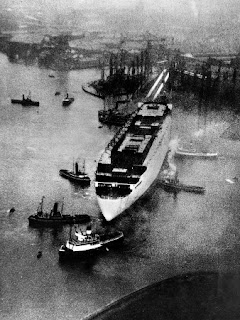 Today the ship lays at anchor in Long Beach, California - a stunning, solitary reminder of the bygone age of transatlantic ocean travel and majestically big ships.
Posted by The Ranger at 11:45 PM No comments:

These two photos (which I do not own, for the record) show the funnel construction for the second Mauretania, launched in 1938. She was the first ship ordered by the newly formed Cunard White Star Line. 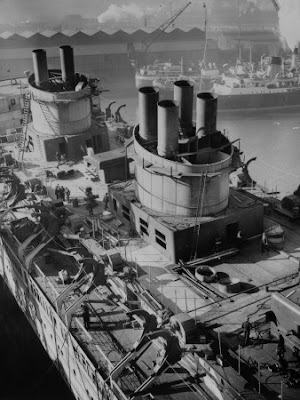 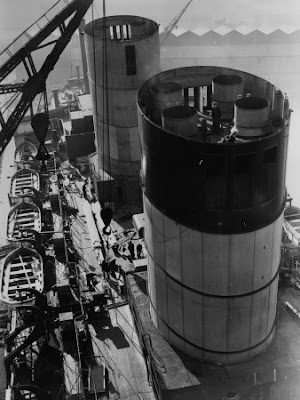 These pictures were taken while the ship was being constructed at the Cammell Laird shipyard in Birkenhead, England - right across the River Mersey from Liverpool.
Posted by The Ranger at 10:15 PM No comments: 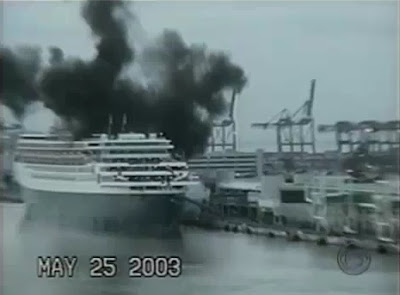 Steam powered many of the great ocean liners and gave them their terrific speed. If not handled properly, however, it can prove fatally tragic.
May 25, 2003 saw a deadly boiler explosion aboard the SS Norway (ex-France) that ultimately killed eight crew members and seriously injured an additional ten. The accident happened early in the morning at Florida's Port of Miami. Norway had just returned from a cruise and docked when the boiler ruptured.
The ship's owner - Norwegian Cruise Lines - was charged with gross negligence by federal prosecutors. They pleaded guilty. An investigation found that the accident could have been easily prevented: Norway's boilers were old, cracked and leaky by the time of the explosion. Repairs had been made over the years, but they were shoddily done and unsafe. The ship's busy schedule also added strain to the aging boilers.
Norway was subsequently taken out of service and laid up in Germany for a time. She was ultimately sold for scrap and broken up at Alang, India like so many other ships.
References: "NCL pleads guilty to 'gross negligence' in Norway explosion," The Miami Herald, May 3, 2008.
Posted by The Ranger at 9:26 PM No comments:

It was 10 years ago today that the world stopped turning. May we never forget the more than 2,900 souls lost on that terrible day. 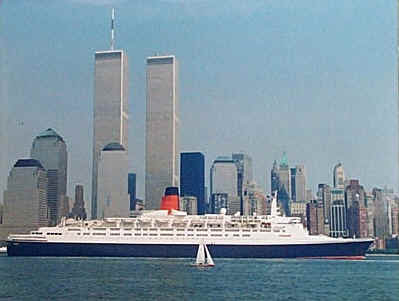 Posted by The Ranger at 8:56 AM No comments:

"The Big Stick" is Coming to San Pedro! 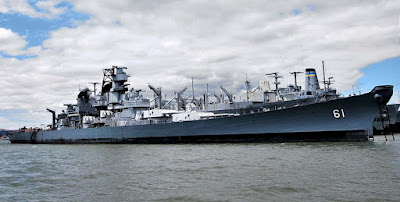 Congratulations to San Pedro, CA and the Pacific Battleship Center on being awarded the USS Iowa! She is to be opened up as a museum ship like the nearby RMS Queen Mary in Long Beach and the USS Midway in San Diego. 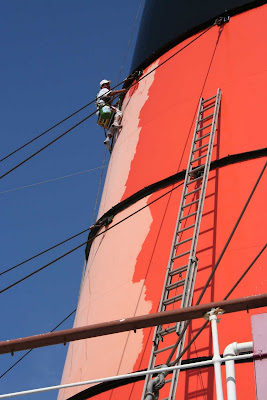 In 2008, the Queen Mary's funnels were repainted to their original "Cunard Red" color after years of fading in the harsh California sun. An original paint chip was used to get the color just right, which proved to be an astounding success.
Over 120 gallons of paint were used in the process - and an environmentally friendly paint at that. It was created by Richard Hart, a chemist for JFB Hart Coatings Inc. of Chicago, and designed to reduce the level of smog-forming organic compounds in the atmosphere.
"I'm really proud of this job. After all, it's the Queen Mary," said Hart back in 2008.
From what I can tell - three years later - those three iconic smokestacks are still looking great!
References: Louis Sahagun, "Goodbye, old paint: A new coat for the Queen Mary," The Los Angeles Times, November 21, 2008, under Local, http://latimesblogs.latimes.com/greenspace/2008/11/goodbye-old-pai.html (accessed September 6, 2011).
Posted by The Ranger at 10:16 PM No comments: